In Stock:
No
Delivery Time:
Unknown at this time. Contact us to find out more!

7:30 - 8:30PM at the Denver Percussion Warehouse, please bring a receipt as your admission!

We are very excited to have Russ Miller put on a clinic at Denver Percussion! Here's his bio:

"Russ Miller is internationally known as one of the top drummers of today. As a Multi-Platinum recording artist, he has played on multiple Grammy® award winning recordings with combined sales of over 26 million copies.  His musical versatility has led him to work with an incredible list of over 50 international artists from legends like Ray Charles, The Fifth Dimension, Natalie Cole, Tina Turner & Bobby Caldwell through modern stars, Nelly Furtado, The Psychedelic Furs, Hilary Duff, Steve Perry, Andrea Bocelli, Daniel Bedingfield and Meredith Brooks.  As a star of the Los Angeles studio scene, the Modern Drummer Magazine Readers Poll has repeatedly voted Russ in the top 5 Studio Drummers in the world, including the 2015 Poll, where he was voted the #3 Session drummer.  He has performed on more than 400 albums (including many #1 Billboard hits like Nelly Furtado's "Whoa Nelly" and Hilary Duff's "Metamorphosis").  Russ has also recorded for many T.V. shows and over 60 international movies (such as #1 box office titles like "Chicken Little", "Fracture", "Storks", "Resident Evil Apocalypse", "Percy Jackson" and the "Boondock Saints" series of movies, just to name a few).   Along with his many sideman recording credits, he has been a staple on T.V. “house bands”.  Such as “American Idol”, for all of their “Mentoring Sessions”.   Russ also has four critically acclaimed solo albums, Cymbalism, Arrival, the Arrival Live concert DVD/CD and his latest "Chegada3" with the Arrival Trio. In addition, Russ performs educational clinics throughout the world for Mapex Drums,  Zildjian, Remo, Vic Firth, DW racks and hardware, Zoom AV products, Porter & Davies Tactile monitoring, Hercules stands, May E/A Mics, Prologix, SKB cases, Arrel Audio Electronics, Puresound Snares, Cympad, Switchkick and Meinl music instruments, for which he maintains product endorsement relationships and multiple signature instruments. In October of 2014, Russ was awarded an “Honorary PHD” for “ sustained lifetime accomplishments that have benefited Drumming artistry and the Global Drumming community”, from the Shanghai Conservatory of Music, in Shanghai, China.  He is an official “Guest Professor” at the Shanghai Conservatory, the Beijing Music Academy and also has authored two books: The Drum Set Crash Course and Transitions.  Along with his three videos, "Arrival-Behind The Glass" from Hudson Music, The Drum Set Crash Course and The Drum Set Crash Course Tuning Edition from Alfred Publications, Russ is a 7-time Modern Drummer readers poll winner.  His solo projects were also voted the #1 educational books and videos in the world (2001-2004)."

In Stock No
Delivery Time Unknown at this time. Contact us to find out more!

(No reviews yet) Write a Review 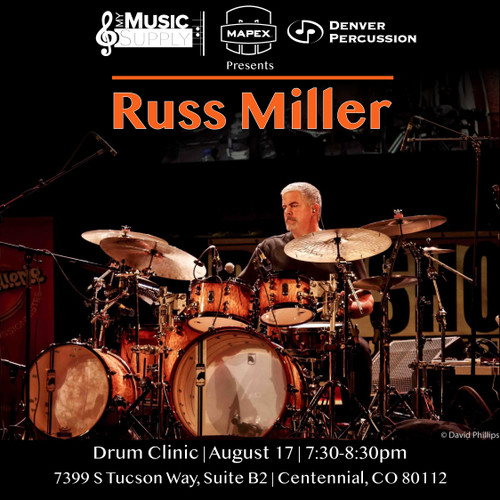 Alfred 0418B Transitions By Russ Miller

Alfred 0418B Transitions By Russ Miller